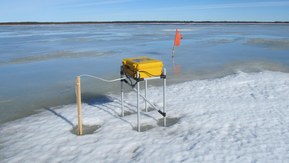 SIMBA unit in action amongst the ice

‘SIMBA’ units comprise a novel autonomous platform and sensor that monitors temperature profiles in sea-ice (including snow and water) using a chain of digital temperature chip sensors. The unit is capable of resolving material interfaces (e.g. air-snow and ice-ocean boundaries) and monitoring the thickness of sea-ice. The instrument is compact, low-cost and easy to deploy via a 5cm auger hole. A standard SIMBA chain is capable of providing a temperature profile across 4.8m of length, with temperature readings made every 2cm accurate to +/- 0.125°C. The units also incorporate data telemetry (via Iridium SBD); have in-built GPS for tracking sea-ice movement, a magnetometer for tilt and floe rotation, and a barometer for surface air pressure. An external sensor can also be provided for local ambient air temperature readings.

Flexibility of the cable being used, particularly at low temperatures (-35Deg C)

Reliability of the connections at low temperatures and in damp environments

Lapp worked with the customer to identify the correct components for each of the above criteria, offering samples for evaluation within their state of the art Lab conditions. After a number of tests the OLFLEX® ROBUST 215C and EPIC® HA housings with the EPIC® STA-6 inserts were chosen for the final prototype. However one more criteria needed to be taken into account, which was the cable had to be white to withstand sun glare from the snow. This was achieved by utilising OLFLEX® CONNECT expertise. Through provision of a pre assembled base and cable a white heat shrink was applied to the exposed OLFLEX® ROBUST 215C, and along with the pre-assembled hood the customer saved time and costs in their assembly of the final units. This allowed a quick and reliable plug and play system once in place on the pole.

Subsequently, Lapp is now working with SRSL on a second generation solution that will encompass further data monitoring with an extended design.