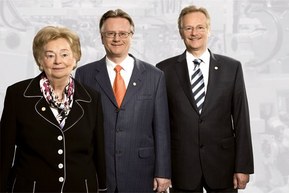 A third generation of success

LAPP - A German family business that continues to grow

Germany has over three million family-owned businesses. In 2017, LAPP generated over one billion euros of turnover. This makes it one of the 250 most successful companies in the country, according to a ranking of the “Top Family Businesses in Germany” in 2018 by business portal DDW.
This success story traces its origins to a man called Oskar Lapp. When considering the time-consuming manual insertion of single cores and switching strands into outer sheaths, he asked himself a simple question: “How can I make this better?”. The engineer answered his question with an innovation. In 1957, he developed the first industrially manufactured, flexible and oil-resistant control cable with colour coding.

His wife Ursula Ida Lapp believed strongly in her husband’s invention, which later became known under the brand name ÖLFLEX®. In 1959, she registered the company U.I. Lapp KG at Stuttgart district court. The couple had worked on this name over the kitchen table together. With it, they wanted to emphasise that theirs was a family business. They took out a loan of 50,000 marks to finance their new enterprise. This investment quickly paid off. LAPP saw massive demand for its pre-assembled cables, and the company grew quickly.

With their ambition, vision, courage and dedication, Oskar and Ursula Ida Lapp became an example, including to their own sons Andreas and Siegbert. After Oskar Lapp died of a heart attack in 1987, they and their mother continued to lead the company as their father would have wanted.

Since 2017, the third generation of the Lapp family has begun to assume responsibility for the company and its employees: The grandsons Matthias and Alexander Lapp joined the family business. For the founder Ursula Ida Lapp, who was born in 1930 and passed away in April 2021, the early and strategically planned entry of the third Lapp generation secured the growth and thus the future of the globally active family business.

In 2022, the family takes the next big step: the second generation, Andreas Lapp and Siegbert Lapp, retires from the operational business of the LAPP Group and places management responsibility completely in the hands of the third generation. Matthias Lapp, as the eldest grandson of the company founders and son of Siegbert E. Lapp, now holds the position of Chairman of the Board of LAPP Holding AG. Andreas Lapp's daughter Katharina Lapp was appointed to the Supervisory Board. This means that in the future, one family member will continue to be represented on the Executive Board and one on the Supervisory Board: LAPP remains a family business.

The Stuttgart-based family business LAPP will be managed by the third generation from October 1, 2022.